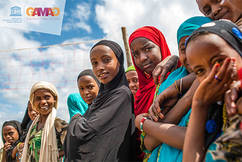 The Caribbean Broadcasting Union (CBU) is the General Secretary of GAMAG and will be represented at the meetings by member of the CBU Board of Directors and head of Starcom Network in Barbados, Mr Dominic Beaubrun.

The events are co-hosted by the Republic of Lebanon and the Hellenic Republic (Greece) and supported by close to 20 UN organizations. Both events will coincide with the International Human Rights Day, December 10.

Women’s participation, their leadership and fair representation in media and technology are way below that of their male counterparts. After four decades of research and development actions, little change can be celebrated.

The world famous actor* Geena Davis observed that at the present rate, it will take another 70 years to achieve gender equality in the media. This is more than four times the number of years agreed upon by the international development community to achieve the new sustainable development goals, by 2030. A dialogue of a different order is needed.

Gender inequalities in the media and technology are rooted in cultures, traditions, stereotypes, beliefs and a lack of awareness of the negative gains of these inequalities on economic and sustainable development. Such social practices are no longer separated by remote geographical boundaries. Dialogue then becomes crucial to bring about a deeper understanding and agreement on a common path to change.

GAMAG is a UNESCO-initiated groundbreaking partnership among over 800 media, civil society, academic, private and governmental organizations.  Its purpose is to be the global mechanism through which Section J, gender and media, of the Beijing Declaration and Platform for Action (BDPA) can be systematically implemented and monitored. It is governed by 20 member organizations that form the international steering committee.

Before GAMAG there was no defined global framework for follow up on Section J of the BDPA. The twin events from 7-10 December 2015 will build on the global partnerships started through GAMAG. Yes We Must!

media institutions and professionals; joint negotiation of rights for programming; and advocacy in regional and

international forums on policy and technology issues. In 2015, the CBU celebrates forty-five (45) years of service to the media and Caribbean development, since its establishment in November 1970 in Georgetown, Guyana.