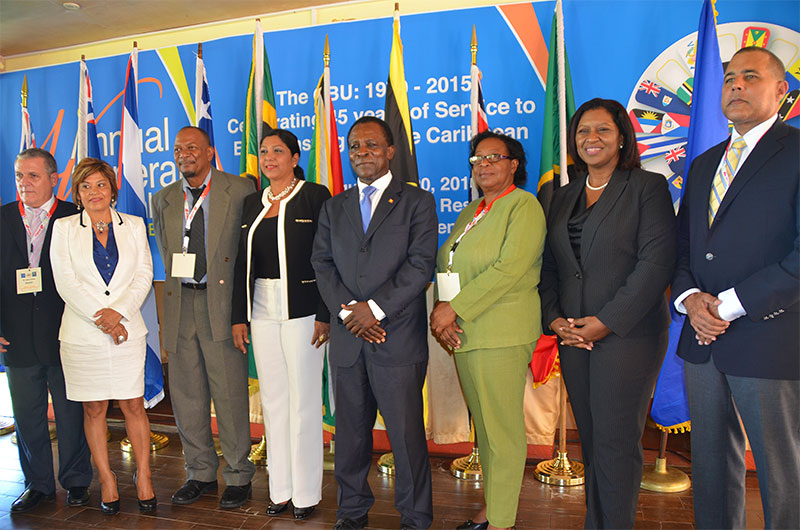 The Caribbean Broadcasting Union has just concluded its 46th Annual General Assembly in St. George’s, Grenada. This year’s meeting, under the direction of CBU President Shida Bolai, addressed a wide ranging list of areas including: increasing Caribbean broadcasters’ legitimate access to high-value programming, digital transition and the convergence of broadcasting and telecommunications, and protection of freedom of expression and access to information for the media and the wider society.

The Assembly also considered in detail, the CBU’s fundamental composition and categories of membership. The CBU’s members having consulted on proposed amendments to the Union’s By-Laws, they approved changes to permit full membership by media forms other than the traditional radio and free-to-air television systems.

With the passage of the amendments to the By-Laws it is now possible for on-line publications, as well as newspapers and magazines to be full members of the CBU.

CBU President, Shida Bolai noted, “the sector is very different than it was forty-five years ago. The rapid and extreme changes in media audiences, ownership, markets, professional capacity and technology have made broadcasting a totally different sector to that of 1970. These changes have been agreed by the CBU’s members to ensure it maintains its relevance in the media sector and in the region, while staying true to its original mandate of promoting development through regional integration.”

During the Plenary discussions key industry issues were addressed and the CBU’s positions were recorded in resolutions on: digital transition and e-waste, access to Olympic programming, spectrum availability, open data and the right to information, the impact of broadcast piracy on the Caribbean media sector, as well as the need for protection of broadcasters’ signals through an international treaty.

The CBU member stations noted that despite the MOU with CANOC Broadcasting Incorporated there are still no firm arrangements to make sure the games, especially the events featuring Caribbean athletes, get the widest possible airing on broadcast stations. The CBU will be seeking the urgent intervention of National Olympic Committees to ensure that audiences who don’t have access to subscription services can still see and hear the games on free-to-air services.

The allocation of spectrum for broadcasting was also a major feature of the discussion. The CBU stated that protection is needed for broadcasters’ use of the lower frequencies of the UHF spectrum, in light of the major lobby underway for it to be re-allocated to mobile providers. They urged governments to either enshrine the primary allocation in national legislation or to vote for no change at the World RadioCommunication Conference in November in Geneva, when the question comes up for discussion by governments.

With support from UNESCO, the Public Media Alliance and the CBU will collaborate in the delivery of training to Caribbean news professionals in Investigative Journalism in the Digital Age. In announcing the launch of the project, the CEO of the Alliance, Ms Sally-Ann Wilson noted “the training, to take place in 2016 in Kingston Jamaica, will ensure journalists are sensitized to critical sources of information relevant to the needs of the most vulnerable in their audiences. Trainers include Dr. Canute James, former Director of the Caribbean Institute of Media and Communication (CARIMAC) at the University of the West Indies and Professor Brant Houston who holds the John S. and James L. Knight Foundation Chair in Investigative and Enterprise Reporting at the University of Illinois. Prof. Houston teaches investigative and advanced reporting in the Department of Journalism in the College of Media at Illinois.

UNICEF Deputy Representative for the Eastern Caribbean Ms Muriel Mafico announced a new partnership with the CBU to encourage more Responsible Media Coverage of Children and Youth Issues. The project, which will also be conducted in collaboration with the Association of Caribbean Media Workers (ACM) will produce training materials and facilitate workshops for media professionals. The project will also feature workshops in Antigua and Barbuda and Trinidad and Tobago in 2015 and 2016.

Five Caribbean media houses attended their first meeting of the Union as members as they were formally admitted to the forty-eight (48) member body at the 2015 Annual General Assembly.

Six (6) media organizations joined the CBU during period under review. Three (3) were granted full membership: The Parliament of the Republic of Trinidad and Tobago; Multi-Technology Television of Guyana, and DIRECTV Caribbean, headquartered in Trinidad and Tobago.

Three (3) organizations were granted associate membership: Mersu Caribbean, based in Trinidad and Tobago; VRTS of Suriname, and Phase 3 Production Limited, based in Jamaica.

Two new inductees into the CBU Hall of Fame

On August 17, 2015, at a ceremony addressed by Prime Minister of Grenada the Rt. Hon. Dr. Keith Mitchell, the CBU conferred its highest honour on Ms Rose Willock O.B.E. and posthumously on Mr. Terence “Terry” Holder.

The late Terry Holder was recognized as instrumental to the birth of the region’s first ever television news exchange, “Caribvision” as well as the regional television magazine, “Caribscope“. In the recount of his service to Caribbean media, it was highlighted that he was the only person ever to hold both the positions of President and Secretary General of the CBU. After the reading of Mr. Holder’s citation by Mr. Jones Madeira, himself a member of the CBU Hall of Fame, Mr. Holder’s plaque was received by his daughter Mrs Dawn Holder-Alert and his son Mr. Duane Holder.

Ms. Willock’s service to the region, especially in building capacity for emergency broadcasting, was highlighted in the citation read by Editor Emeritus of the Nation Newspaper, Mr. Harold Hoyte. It was noted that Mrs Willock’s career had been marked by her time as Head of the English Service of Radio Antilles in the aftermath of the devastation by Hurricane Hugo in 1989, as well as her recognition on the Queen’s honours lists in 1986 and 1996 with an MBE and an OBE respectively.

These latest additions to the CBU Hall of Fame bring the total number of awardees to fourteen (14).

Following elections held on the final day of the Assembly, the complete Board membership for 2015-16 is:

The AGA also expressed its deep appreciation to the Government and people of Grenada and the local organizing committee chaired by Manager of the Grenada Broadcasting Network (GBN), Mrs. Odette Campbell, for their excellent hospitality in the organizing of the event which was the highlight of the CBU’s 45th anniversary celebrations.

The next CBU Assembly will be held in Cuba in the last week of October 2016, to coincide with the International Television and Radio Conference. The hosting broadcast system will be the Instituto Cubano de Radio y Television (ICRT) headquartered in Havana.