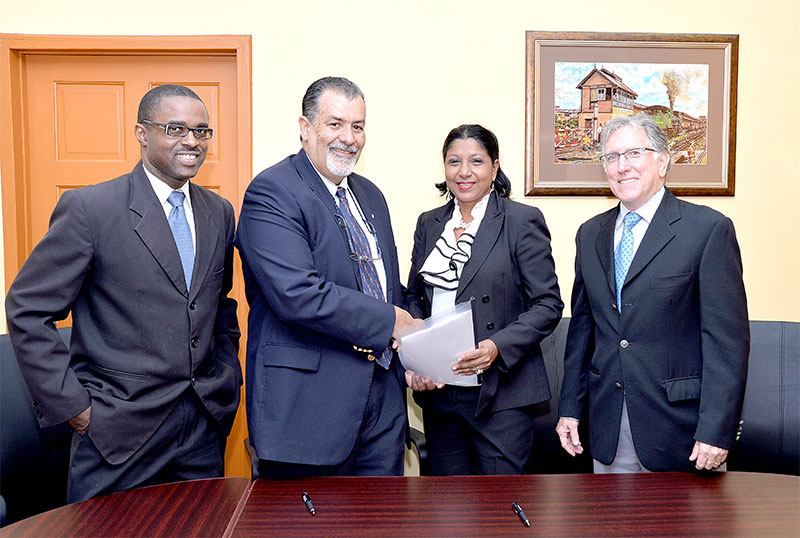 From left to right

CANOC Broadcasting Incorporated (CBI) and the Caribbean Broadcasting Union (CBU) have entered into a memorandum of understanding (MOU) for the airing of the Rio 2016 Olympic Games.

The Chief Executive Officer of CBI, Larry Romany and President of the CBU Shida Bolai today issued a joint statement announcing their great pleasure at the partnership which will bring unprecedented Caribbean centric coverage of the Rio 2016 Olympic Games to twenty (20) countries and territories in the English and Dutch Caribbean. As a result of the MOU with CBI, CBU members will be entitled to transmit coverage of the Games on radio, free-to-air television, cable television and on-line media.

CBI will provide access to twelve (12) feeds from which participating CBU members may select specific content for distribution in their respective markets. Part of the programming to be delivered under the MOU is a television channel designed especially for Caribbean audiences, and produced by ESPN. In addition to their preferred feeds, CBU members will also transmit all semi-finals and finals featuring Caribbean sportsmen and women at the Rio Olympics.

Opportunity for CBU members to report live and direct from Rio

CBI has secured through its partnership with ESPN of major benefit to CBU members is the opportunity to send a limited number of reporters and technical staff to work alongside the ESPN team in Rio, to produce coverage to be sent back to their respective stations.

Not only will CBI deliver Caribbean specific content in partnership with ESPN, CBI will also make exclusively available to its Communications Partner, the IOC’s newest digital Olympic Video Player (OVP) platform first deployed at the Sochi 2014 Olympic Winter Games. The OVP delivers a level of viewership experience never before experienced in the Caribbean.

CBI’s mission is to create long“term sustainable sources of funding for Caribbean NOC’s and CGA through the acquisition and sale of broadcast rights for sporting events during the Olympic quadrennial.

About the Caribbean Broadcasting Union

The CBU is a grouping of forty-six (46) media entities including broadcasters in the English, Dutch and Spanish-speaking Caribbean. The Union’s mandate includes facilitating indigenous programme production and sharing; capacity-building of media institutions and professionals; joint negotiation of rights for programming; and advocacy in regional and international forums on policy and technology issues.