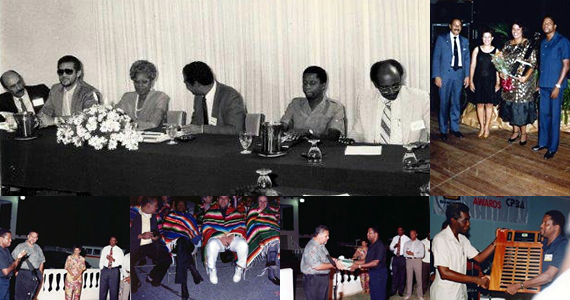 Vic Fernandes of Barbados, Jones P. Madeira of Trinidad and Tobago, J. Lester Spaulding of Jamaica and current President Shida Bolai have all reflected fondly on Terry’s work, contribution and achievements in regionalism through his work in the media.

Mr. Spaulding who is Chairman of Jamaica’s RJR Communications Group, was CBU president for a part of the period when Mr. Holder was Secretary General, and recalled the work in pulling together the elements of what was required to facilitate the support that came from the German foundation, the Freidrich Ebert Stiftung.  Mr. Spaulding remembered Terry as a Secretary General on whom a President could depend to carry through on plans and policies.  He noted that he was focused on achieving the goals of the CBU and worked hard to realize them.

Terry Holder was also remembered for having a sophisticated and subtle sense of humour.  Mr. Spaulding flashed back to one episode that has stuck with him through decades. “I do remember his famous opening of his speech at the end of a plenary (at the CBU General Assembly)  when after a particularly bruising  criticism of the SG’s performance he started by saying, “if beating up on the SG is the answer, what is the question”?.  Mr Spaulding said this was typical of Terry, whose “deliveries were always dotted and interlaced with witticism typical of his educated, dry sense of humour”.

The CBU’s longest serving President, Vic Fernandes, formerly head of of Starcom Network in Barbados recalls Terry as not only a colleague but as a friend.  “I have known Terrence Holder for over thirty-five years in many capacities, as a top class radio producer at the then Guyana Broadcasting Service, later as the General Manager of the GBS and still later in his regional broadcasting roles as an elected member of the board of the CBU, as its President and much later as the Secretary General of the Union,” Mr. Fernandes said.

Mr. Fernandes recalled that when he was first elected as President of the Union, in 1991, “Terry was the Secretary General, and along with Rafiq Khan (a consultant to the CBU) they provided me with early guidance and advice in my new role,” Mr. Fernandes added.   “Kind, caring and thoughtful,” were some of the words he used to describe Mr. Holder.  He also recalled that Mr. Holder was not fearful about expressing his views but he noted that he had a diplomatic manner in making his points.  Mr. Fernandes also cited the General Assembly meeting at which Terry clearly left a mark with his comment about beating-up on the SG.

Mr. Fernandes said Terry’s office could be described as “organized chaos… a desk with mountains of papers everywhere, in no particular order, but he could find any document at a moment’s notice under that pile of paper,” Mr. Fernandes recounts.  He said that above all Terry had a passion for excellence that did not allow him to settle for second best.

Mr. Fernandes recalled Terry holder’s great passion for sports, cricket in particular, and as an active Rotarian both in Barbados and his native Guyana.  “To me he will always be “mi hermano” a little private joke we shared from a CBU conference in Curacao in the late 1970s”, Mr. Fernandes mentioned, though like Terry he has left the comment for others to try and figure out.

Trinidadian veteran broadcaster and former CBU Secretary General, Jones P. Madeira recounts that Terry was the SG who presided over the birth of the Television News Exchange “Caribvision” in the region.  Mr. Madeira noted, “He led the efforts to realize and make successful the dream of Caribvision as a vehicle for news and information flow between broadcasters across the region”.

Mr. Madeira recalls that Terry also presided over the launch of the Caribvision Programme exchange which gave birth to Caribscope – the region’s best known television magazine programme.  According to him, Terry’s goal was to create a regional television network.  “Terry was one of the “troika” – with me and the devoted German development funding partner Michael Abend of the Freidrich Ebert Stiftung, FES” he recalls.

Mr. Madeira noted that as General Manager of Guyana Broadcasting Service (GBS) Terry was a champion for regional broadcasting and for advancing the objectives of the CBU to further regional integration.  “I think he is still under-recognised for his impact on and contribution to media in the region,” Mr. Madeira said.

In a condolence message, current CBU President, Mrs Shida Bolai paid tribute to Terry Holder.  In a letter sent to the Holder family, the Trinidad-based CEO of Caribbean Communications Network (CCN) said his contribution to the “cause of media development and that of the wider Caribbean was deserving of public recognition,” and CBU would be offering that recognition publicly.

The CBU celebrates the life and achievements of Terry Holder as broadcaster, media manager, CBU Secretary General and President, noting they have left their mark in the region and their impact will be long felt.